Hey everybody, we’re back! As autumn sweeps in, it is time for another batch of the brownbread mixtape. We were sad to be away for September but we had an absolute blast at the Electric Picnic and Kalle’s ABSOLUT Fringe show, Three Men Talking About Things They Kinda Know About, was a roaring success (sold out every night and nominated for an award – read more here). So, now we are back with, not one but two shows in September. First up is our monthly jaunt at our Dublin home, The Stag’s Head, on Wednesday October 26th. We are then taking the brownbread mixtape on the road to Waterford to perform at the Imagine Arts Festival once again on Monday October 31st. Both shows will be Halloween themed and we are really excited about them. Admission, as always, is FREE! Here’s the scoop on both: 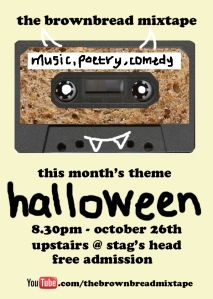 Tom writes songs of cycles, distance love and indifference. He has shared a stage with the likes of M. Ward, Fionn Regan and Josh T Pearson. After a string of shows in recession ravaged Ireland, including opening for Lisa Hannigan, Tom felt the need to share his new songs with Australia. The Repetition will be released in November and Tom has just announced an Australian tour. the brownbread mixtape is buzzing at the prospect of hearing this fine songwriter in the intimate surroundings of the Parlour Bar in Stag’s Head. Bring it on.

There is a space where poetry music and song are one and the same. Stephen James Smith, the poet and spoken word artist, in collaboration with Enda Reilly the singer and songwriter have recorded Arise and Go, an EP which explores that very space. Arise and Go is also a meditation on what it is to be Irish today and it does this through exploring some great poetry by Yeats, Kavanagh, Pearse a recitation by Luke Kelly and a new take on The National Anthem. An internationally acclaimed poem by Stephen and a macaronic version of one of Enda’s songs completes this intriguing collection of recordings. the brownbread mixtape is thrilled to bring these two giants of the Irish spoken word and music scene together. Individually they have been among our most popular performers and together we are expecting astonishing things. We are delighted to have them together for a special joint show.

Our very own hilarious sketch troupe will perform brand new skits and sketches on the theme of the night. The Brownbread Players for this month’s show are Gus McDonagh, Sean McDonagh, Eva Bartley and Kalle Ryan

“Stephen James Smith is a ball of hydrogen gas that should be pumped into every household across the land. He knocks seven shades of shite out of all the usual “birds and bees, whey and cheese” nonsense you find at poetry readings” – Jinx Lennon

“I truly cannot think of another Irish solo artist who’s even close to creating the type of music [Enda Reilly] is.” – The Event Guide

Fergus Costello is a performance poet based in Tipperary and is the current Munster slam poetry champion. He was also the winner of the Cuisle International Poetry Festival Grand Slam held at The Locke Bar, Limerick in 2010. Fergus is also a highly regarded artist and his work has been displayed widely. the brownbread mixtape is beyond excitement to welcome Fergus and his mercurial talents to the stage.

Deaf Joe is the nickname of Waterford musician Joe Harney. He originally started out writing music for theatre, but was convinced to consider putting out his own music by friends who heard a demo of a track he had left over from a show that never went into production. To date he has released three EPs through Dublin’s Delphi Label, and is currently preparing his first full-length album for release later in the year. He also sometimes joins the live line-up of fellow Waterfordian Katie Kim. the brownbread mixtape is delighted to welcome the mellifluous talents of Deaf Joe to our stage.

Barring any technical hitches, we will be broadcasting both shows LIVE ON D’INTERNET here

And you can expect lots of surprises and silliness

It would be a pleasure to see you all there!

The brownbread mixtape is a free monthly comedy, poetry & music show in the Stag’s Head pub in Dublin, Ireland.

Each  show has a theme. We all have loads of fun. Simple as that.